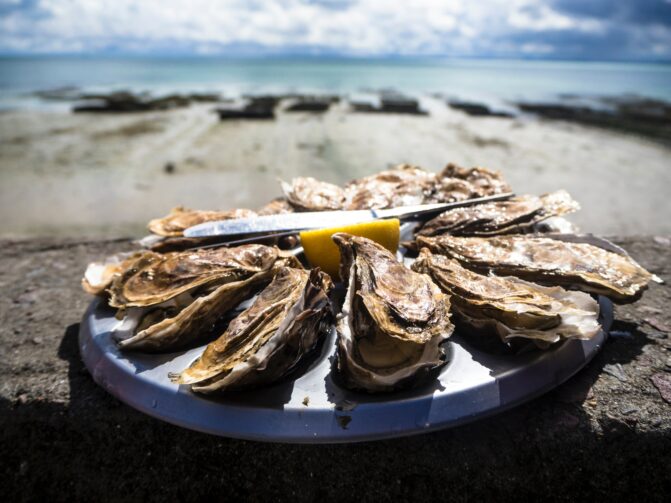 Tasty Delicacies are Packaged, Shipped, and Transported with Care by Prime Fresh Handling

When a couple dines on rich baked Oysters Rockefeller at a fine restaurant or when friends gather at a casual eatery to shuck it up together with raw oysters, they’re doing what people have done for millennia – enjoying luscious, salt-water bivalve mollusks – and doing so in their own favorite way.

Expertise & Caring
We’re proud to say that Prime Fresh Handling plays an important role in assuring these salty slippery gems make it to their destination fresh and healthy after managing every last detail of their complex journey – from their source waters to table. We’re highly experienced in arranging for oysters perishables to be packaged, temperature controlled, transported, and shipped safely to restaurants nationwide, gourmet food-service companies, and other wholesale clients.

So as another year of savoring the taste of American oysters is in full swing, we’re assuring that these top quality varieties harvested from coastal areas of the Pacific Northwest, Gulf of Mexico, and East Coast reach our clients quickly, efficiently, and with the utmost care in handling for food safety.

Whether you need Wellfleet oysters from the Cape Cod area, Ninigret oysters from Ninigret Pond near Charlestown, Rhode Island, or Blue Point oysters (with a mild taste and perfect for “beginners” to sample) from Long Island, Prime Fresh Handling stands ready to assist. We also transport and ship Rappahannock oysters from the Chesapeake Bay region, Olympia oysters from Puget Sound, and myriad other varieties of mollusks harvested in U.S. coastal waters.

Knowing the Ropes
“No matter the harvest location, nor the type of oysters being shipped, we have perishable experience that’s critical to assure that the delicate oysters have consistency in temperature, aren’t exposed to excessive cold that will cause mortality, and don’t become a health risk from excessive heat,” says Christina Moscoso, Prime Fresh Handling’s General Manager-West Coast, who adds that her company holds multiple certifications for food safety.

For example, Moscoso’s team assists numerous wholesale customers with packaging, temperature-sensitive storage, and truck transport from Canada/New England, Maryland and Virginia (the Chesapeake Bay region), the Pacific Northwest, and elsewhere to Los Angeles International Airport, where the oysters head out within temperature-controlled aircraft to their final destination. “So, let us know how we can assist your business,” says Moscoso.

Certified in Safety
Speaking of safety, throughout the oysters’ entire journey, food safety is a top priority. Upholding our status as a world-class provider of the highest caliber of quality in the perishable food industry are the numerous food-safety certifications PFH has achieved.

With a certified HACCP program in place (Hazard Analysis & Critical Control Points), as well as heaving earned a Primus Certification issued by the Global Food Safety Initiative (GFSI), PFH stands out as one of the industry’s most trustworthy handlers and shippers of live shellfish, as well as fresh seafood, and other perishables.

Eating oysters is one of life’s simple and tasty pleasures, and that’s been the case throughout history. In fact, evidence of oyster consumption dates from Prehistoric times. Oysters have been cultivated in Japan for more than two millennia, while in both the United Kingdom (Whitstable) and France (Cancale in Brittany), oysters have been a luscious culinary treat since Roman times.

Today, we have many food service companies, restaurants, and companies in the ‘business” of oysters, but did you know that Sergius Orata of the Roman Republic is widely considered civilization’s first major merchant to cultivate oysters on a grand scale. Quite inventive, he built a sophisticated cultivation system, consisting of locks and channels that controlled the tides. He was so successful that during Roman times, people would quip that he could breed oysters on the roof of his house!

Actually, the English word, “oyster,” was first used in the 14th century and comes from the French word “oistre,” which is derived from the Latin “ostrea” and Greek “ostreon.”

Today, most chefs and restaurants offer menus that feature oysters of multiple varieties from different regions of the globe. Did you know that oysters taste differently, depending on where they’re sourced? It’s true. Oysters harvested off the Alabama coast will have a distinct flavor that’s different from their “distant cousins” in Washington State, the Chesapeake Bay, Gulf of Mexico, or Maine.

A Growing Market
Author Jonathan Swift once said, “He was a bold man that first ate an oyster,” but today, the taste has been acquired by new generations of consumers.

Oyster lovers consider these tasty seafood treats a flavorful, delicacy to be savored. Also, there are a zillion ways to serve them – raw on the half shell, smoked, roasted, steamed, fried, baked, broiled, boiled, poached on toast, grilled, stewed and even pickled.

You may have heard the old adage that it’s only safe to eat oysters in months that contain an “r.” Well, that’s been proven a myth. The reality is that oysters farmed in clean water, harvested hygienically, and transported at the proper temperature arrive fresh and safe to eat year-round.

And They’re Good for You
Rich in protein, oysters are an excellent source of zinc, iron, calcium and selenium, as well as Vitamin A and Vitamin B. So, consumers can get their healthy “oyster fix” by  shucking and eating oysters raw or savoring a dish such as the elaborate Oysters Rockefeller, created by Jules Alciatore at the famed New Orleans restaurant, Antoine’s, more than a century ago.

Certainly, oysters appeal to die-hard seafood enthusiasts but, increasingly, they’re gaining in popularity with consumers who are tasting them for the first time. Experts say that the key to success in appreciating oysters is to try different varieties and learn which oysters (with varying flavors) that you like best.

As U.S. and global demand for oysters climbs, it’s great to know that Prime Fresh Handling takes extreme care in handling, storing, transporting, and shipping such time and temperature sensitive perishables, including oysters. We’ll assure the “water-to-table” journey for your oyster shipments is quick, safe, and choreographed with ease and professionalism by our team.

We’re Wild About Handling Bluefin Tuna, The ‘Tiger of the Seafood World’

Challenges in Seafood Logistics: The Back Story